Oxidation is the New Black | TeaSource
Skip to main content

Black tea is black tea (as opposed to purple tea) because of oxidation. If you cut an apple (or banana or zucchini etc.) in half and let it sit, within a few minutes the exposed flesh start to turn brown. That’s oxidation.

And that is what happens to make black tea. They roll, crush, tear, cut, and/or curl the tea leaves; this is the equivalent of cutting the apple.   Thus they expose the interior of the plant, disrupting the cell membranes to air.

A rolling machine in Sri Lanka, crushing the leaves, making them juicy—the precursor to oxidation.

The tea leaves get all juicy, just like an apple gets juicy if you cut it. If they are making black tea, they spread the juicy leaves out on a long flat surface, like a trough, table, or even the floor (using a tarp), and let the leaves turn brown. That's oxidation. If they leave the leaves out long enough, they oxidize fully and become black tea. It is relatively easy to stop or prevent oxidation. Apply gentle heat to the leaves, which kills the enzymes in the leaf and prevents oxidation from occurring, or stops the oxidation at that point.   No browning.

Why do tea folks bother with oxidation? Without it, all you would have is white or green teas.  I love white and green teas, but if someone took my Grand Keemun away I would go crazy. The date and origin of deliberate oxidation as a process for making black tea is not certain.  Fujian has been making what would now be considered black tea since the late Ming dynasty, but large scale production did not take place in China until the 19th century. It is important to understand that for all intent and purposes black tea is NOT drunk in China—at all.  They make a remarkable amount and variety of black teas in China, but they don’t drink them.  It’s not completely crazy to speculate that oxidation was “invented” by mistake.

What happens during oxidation? The plant gives off H2O (water evaporating) and absorbs extra oxygen from the atmosphere which, with the enzymes in the leaf, triggers a whole bunch of chemical reactions, causing the leaf to turn black/brown, the flavor and aroma to change, etc. etc. 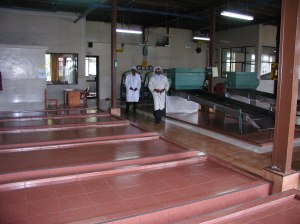 A dhool table (or trough) in Ceylon, the tea would be spread out across these areas.

And yes, there is a purple tea.  In fact, there are two kinds of purple tea, both are real tea from the camellia sinensis plant- one from Africa and one from China.  Watch this blog for more info.